Over the summer I had one of the most life giving, most giggle filled, most joyous weeks in my life. You’re probably thinking I’m exaggerating, or being a bit dramatic, but this week truly changed my heart and perspective on the Lord, changed the way I engage with kiddos, the way I see myself, and a new lenses on relationships. Over the summer I was a kids intern for my church’s Kids Ministry program alongside another girl named Wynter. During the internship, there was a week where we went to camp, and Wynter helped administratively, and I was a camp counselor.

We were both ecstatic to be at a kids camp for a week, but did not truly know how big of an impact it would be. Growing up, I was such a quiet, tomboy of a girl, I never really enjoyed camp, because I loved to do more ‘boy’ stuff, rather than painting nails, or playing fake fashion shows in the cabin. So coming into this week, not knowing what was all in store, I was afraid of not living up to the counselor these girls desired and needed in the phase of life they were in. I was coming out of a phase of life where everything around me was changing, and the walls of consistency were crumbling. Where I had to graduate later than the rest of my class, relationships near and dear to my heart had fallen through the cracks, and I was getting sicker. Coming into camp I was nervous of how it was going to change me, fearful that more change was going to occur, rather than trusting God’s plan in how He was going to change me for the better.

So with glow in the dark colorful headbands, (protip: put campers names on them, helps when trying to find your kiddos in a sea of other campers & when I didn’t know their names at first) black boards for words of the day, coloring books, hundreds of hair ties, extra conditioner, twizzlers, gummy bears, and multiple swimsuits, I headed off to camp.

Camp wrecked me. Not in a bad way, but wrecked me in a way that I would never be the same again. I ended up having twelve 3rd-5th grade girlies, and the amount of giggles throughout our cabin during the time there was so joyous and life giving. I had my bosses two daughters, my dad’s boss’ daughter, a few others from church, and some new faces. Some girls came into camp with parents being unsupportive of Christianity, almost half our cabin had lost a parent in the past few years, and others, it was their first time at camp. So the phrase, “mixing all the personalities into a bowl” was very accurate for our cabin. Camp didn’t wreck me in a bad way. Like causing me to hate kids, or never wanting to be a camp counselor again. No, camp wrecked me, because through camp I learned how selfish I had been living. God met me in the 5am devotionals before the counselor meetings, before the sun rose, and before my girls woke up every morning bright and early at 6am. God met me during my 12am showers after emotionally exhausting days. God met me when we talked through mourning the loss of a parent. God met me through the sadness, heartache, joys, laughter, and most importantly in the celebrating of half the cabin accepting Christ into their precious, beautiful hearts. God met me in the hard days, when teamwork fell through, when homesickness got the upper hand, when sickness came and hit hard, or when nap times didn’t happen. God met me in the early mornings, and late nights. God met me in the disconnection from the outside world. It was in the times of loneliness, that God wrecked me, showing me how truly lonely my life was.

God wrecked me in the way of relationships. Showing me how I was allowing those close to me, to keep hurting me, not giving time for the wounds to heal, not giving space for forgiveness, and time to learn from the mistakes of how toxic it was in the last months. He showed me how I was uniquely created, and after some of my campers talked through not being treated fairly, how I was also not being treated with respect by some. God showed me that I deserved to be loved respectfully. He showed me that I was living in fear, rather than living fearless through Him.

I never knew that I could make an impact on kids lives. I’ve babysat since I was in 5th grade, but never truly knew how big of an impact I could be. God showed me that camp is where kids from all different phases of life come, to escape the harsh parts of their lives they’re going through, to come to a place, where God has specifically created counselors who have a passion for Him and kiddos to come be apart of their lives. Showing them Christ’s love.

One camper even told me, she had a horrible experience last year with her previous counselor, and that she expected a great week, so there needed to be a conversation on ground rules before the week could begin (she said at the end of the week I did a pretty good job haha). When each girl accepted Christ into their hearts, there were cheers, celebrating, bible verses highlighted, notes written, prayers prayed, and loads of tears from all. It was a truly beautiful thing to watch these young girls wanting to change their lives, and to start living a life for God’s kingdom. 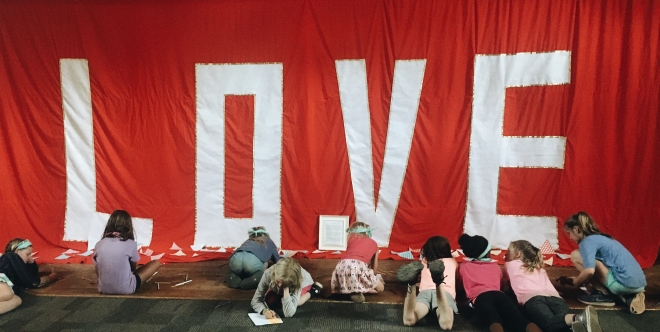 Camp definitely made me go outside my comfort zone, and I’m so grateful I got to go. Public speaking has always been an issue for me, making me sick to my stomach anytime I would have to present in front of my class. But Christy (my boss), pushed me hard, and now public speaking isn’t an issue anymore. Wynter and I each had to teach a campfire lesson one evening in front of 100+ kiddos, and I was sick going into it. I taught on Moses’ trials in the desert, how there are times in everyone’s lives where we go through walks in the desert, not knowing our identity, not knowing when this dry season of our lives would end.

I taught on my concussion, and how my memory loss caused me to forget who I was. (That’s a whole other blog post), but the point is, that God meets us in whatever big or small desert phase of life we are in. He comes and picks our faces up, showing us where His well of forgiveness is, cleansing us. At the end of the lesson, my campers and I were in a puddle of tears, tears of sadness, but tears from others because they had finally realized they could make it through the difficulties they’re facing if they put their trust in the Lord. It was a hard night, talking about why God even creates deserts in our lives, but the conversation switched from “why does God create deserts?” to “wow I can’t wait for his well.” 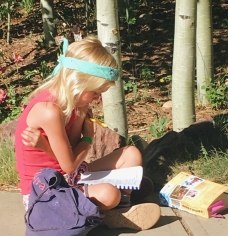 It was truly a beautiful thing watching my cabin of littles diving head first into the Bible every morning before breakfast. To see their hearts on fire for God, not caring what others thought, and solely focusing on reading their bibles.

God taught me how to find the joy, laughter and the beautifulness of chaos. When our cabin looked like a hurricane came and wrecked it, we would turn on Disney princess music and dance as we cleaned.

Or when we were barely able to make it to breakfast on time, to find the simple joy that all girls were accounted for and that all of them were clean. Or on the days filled with sunburns from hours upon hours in the pool, but the girls had fun, and had  met other campers. Or the days feeling like a hot-crazy-mess, that at the end of the day all the girls came together in a circle, talked about what word was pressed onto their hearts, writing it down on the blackboards, and praying for one another. Or when I felt completely wiped out, having a line form for hair to be braided before bed. Being able to have a few minutes with each precious girl, braiding her hair, and hearing her heart from the day.

Camp showed me that I need to focus on the simple laughters, joys, and love in each day, rather than focusing on the harsh negatives. He showed me that on the emotionally hard days, He is still lending an ear during a 12am shower, or a 5am devotional. My prayer for these sweet kiddos, is that they would wholeheartedly pursue Christ, even in the hard times, and would see His unconditional love. That life throws curveballs all the time, but to laugh in the chaos of it all. 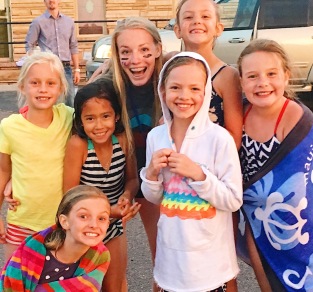 I challenge you, if you have a passion for touching the lives of young kiddos through Christ, to invest into a bible study, or a Sunday morning service, and if you’re brave enough, to think about being a camp counselor. I never would have been a camp counselor if Christy hadn’t asked, but it impacted my life drastically, and added a perspective to my life that I needed. I would totally love to be a counselor again if the opportunity arose, and these sweet girls have made a forever impact on my life, that I will endlessly treasure.